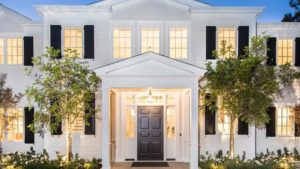 Former model Nicole Murphy and football analyst Michael Strahan have listed their house in a gated community in Brentwood at $6.95 million.

Defensive end Strahan, 40, played for the New York Giants throughout his NFL career, retiring in 2008 after winning Superbowl XLII. He starred in the 2009 TV series “Brothers.”

The property was purchased for $5 million in 2009, the year Murphy and Strahan got engaged.

They are selling because they don’t use the house very much, according to listing agent Bob Hurwitz of Hurwitz James Co.