Luxury real-estate trends in Los Angeles are like sequels to blockbuster action movies: Everything is bigger, more high-tech, and definitely over the top.

And nothing says luxury like amenities that no one else has – the more outsized, the more beautiful and unique, the better. Egan interviews several well-known reps in this market to get an understanding of what drives the trend.

According to Million Dollar Listing star James Harris, it isn’t just the clients asking for flashy extras. Developers of spec houses want theirs to stand out from the rest, so they engage in a sort of one-upmanship by adding newer, better stuff — like 6,000-square-foot master suites, “ice rooms” and even a jellyfish room, to cite three unusual features of a recent Bel Air mansion project.

Our own Josh Reef weighed in about client-driven add-ons, like super luxurious master suites and dedicated wine rooms.

“Our clients are looking for amenities like dual master baths. They want steam showers with a rainshower-type shower head, and jets along the interior. They are also expecting a separate tub in the master bath, which tends to be around 500 to 750 square feet.” 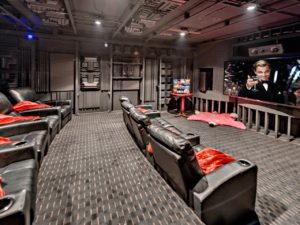 Oenophiles in the Beverly Hills market won’t be satisfied with a little wine fridge, and developers are building to meet that wine-fanatic’s requirements.

“Wine cellars are very important,” Reef says, “and I’m seeing more underground tasting rooms, some with seating for up to eight.”

And where all luxury homes on the market tend to have high-ticket professional appliances, the new trend is simply to double the number of them. Redfin agent Alec Traub says “I’m seeing two of everything, like dishwashers, stoves, and fridges in separate areas, especially in open-concept homes.”
This balances out the desire for an open floor plan on one hand, with the need to have appliances at hand for entertaining – so additional rooms are created to house the extra equipment.

Quietly built in to the newest properties, and an increasingly typical upgrade, is home automation. High-end buyers want to walk in the door and control everything inside using their phone, and even from wherever they are before they get home.  The technology is available and very much in demand, with new products and capabilities added every day – so the developer is always willing to add the extra bells and whistles.

What else appears on the high-end wish list?
Ultra-luxurious swimming pools, of course.

In Beverly Hills, Bel Air and beyond, it’s not enough just to have a backyard pool.
“A must-have is the infinity-edge pool,” Reef says.  But chlorine is being passed over for saltwater pools, the most sought-after type, and developers have followed suit.

And in an area that boasts more movie stars per square mile than any other in the world, screening rooms are almost commonplace. Except the high-end ones get their own bungalow, with adjacent gym room and guest quarters.

The gym room itself is morphing more into the ‘wellness center,’ probably a reflection of California’s leadership in everything related to healthy lifestyles and physical appearance. The personal wellness center can include everything from saunas and spas to Egyptian baths, cold water plunges, makeup rooms and hair salons.

And once the recipient of this custom beauty regimen is ready for his or her closeup, the next step is to show it off. Young Hollywood will then rush out to the latest hot nightclub, but for upping the luxe hipster quotient, why not have the nightclub in your home? The at-home nightclub makes Mr or Ms media star the host of the ultimate party house – while offering a buffer from the paparazzi.